Join us in Genesis chapters 2 and 3 as we continue in our journey through our series New Year New Family! 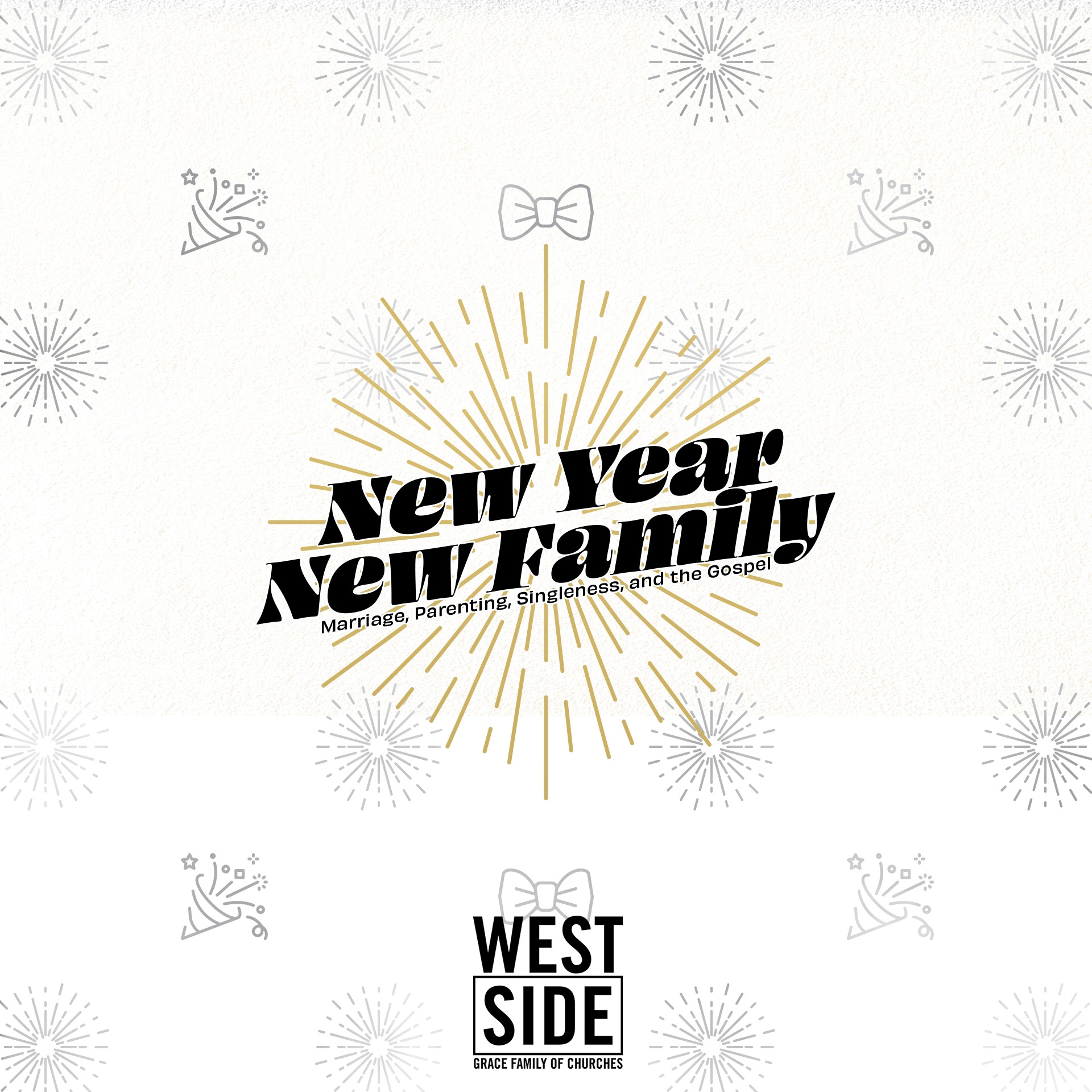 Review> In our series New Year New Family. The goal of this series is to breakdown old foundations and build up new foundations for our family. Our theme verse is found in Joshua 24:14. Today we arrive at the topic of marriage one of which I am inadequate. Tell Ruth Graham story. “I am just another beggar pointing to where the bread is at.” Martin Luther.

INTRO> We traveled this past week to ATL for Summit. Was there early with the board ad found myself in a predicament. We were going to walk downtown and see somethings and it started to rain… and I was wearing my Jordans! Didn’t have a rain coat plus the GPS couldn’t find where we where at so it couldn’t tell us where to go! When I left PB it was like 67* one day!

APP> I say that to say, my environment changed and I wasn’t prepared for it. I was trying to figure out where to go and I couldn’t find where I was. When we talk about marriage today, I want to approach it with this big idea:

Big Idea > A key to a good marriage is knowing the season that you are in.

CONTEXT> The word “season” is chosen purposefully because that is a word that the Bible uses over and over again: The word itself literally means, “an appointed time”

APP> We all know this to be true, yes? But we fail to often times to see the season that we are in. There are so many variables that happen that can change the season of marriage that you are in:

CONTEXT> Here is what I want to do. I want to walk through the creation account of the first marriage and I want to look at 4 main seasons that I believe every marriage will experience. With these 4 seasons there are 4 other things that come with that: 4 Seasons, 4 Roles, 4 Outcomes 4 Obstacles:

1. Roles- Lovers/Friends “… this reveals man as a social being, made for fellowship, not power: he will not live until he loves, giving himself away to another on his own level. So the woman is presented wholly as his partner and counterpart; nothing is yet said of her as child bearer. She is values for herself alone.” Derek Kinder, Genesis Commentary, pg65

APP> This might be the most dangerous because on the outside everything looks great… The key is to get back to Face-to-Face “ this is my lover and my friend…” Song Of Solomon 5:16

APP> One of the best ways the enemy can destroy your marriage is to simply wear you down.

Big Idea > A key to a good marriage is knowing the season that you are in.

“Within this Christian vision of marriage, here’s what it means to fall in love. It is to look at another person and get a glimpse of what God is creating, and to say, I see who God is making you, and it excites me! I want to be part of that. I want to partner with you and God in the journey you are taking to his throne. And when we get there, I will look at your magnificence and say, ‘I always knew you could be like this. I got glimpses of it on earth, but now look at you!”” – Tim Keller, Meaning of Marriage

**Portions of this sermon are adapted from the book Real Marriage: The Truth About Sex, Friendship, & Life Together by Mark and Grace Driscoll 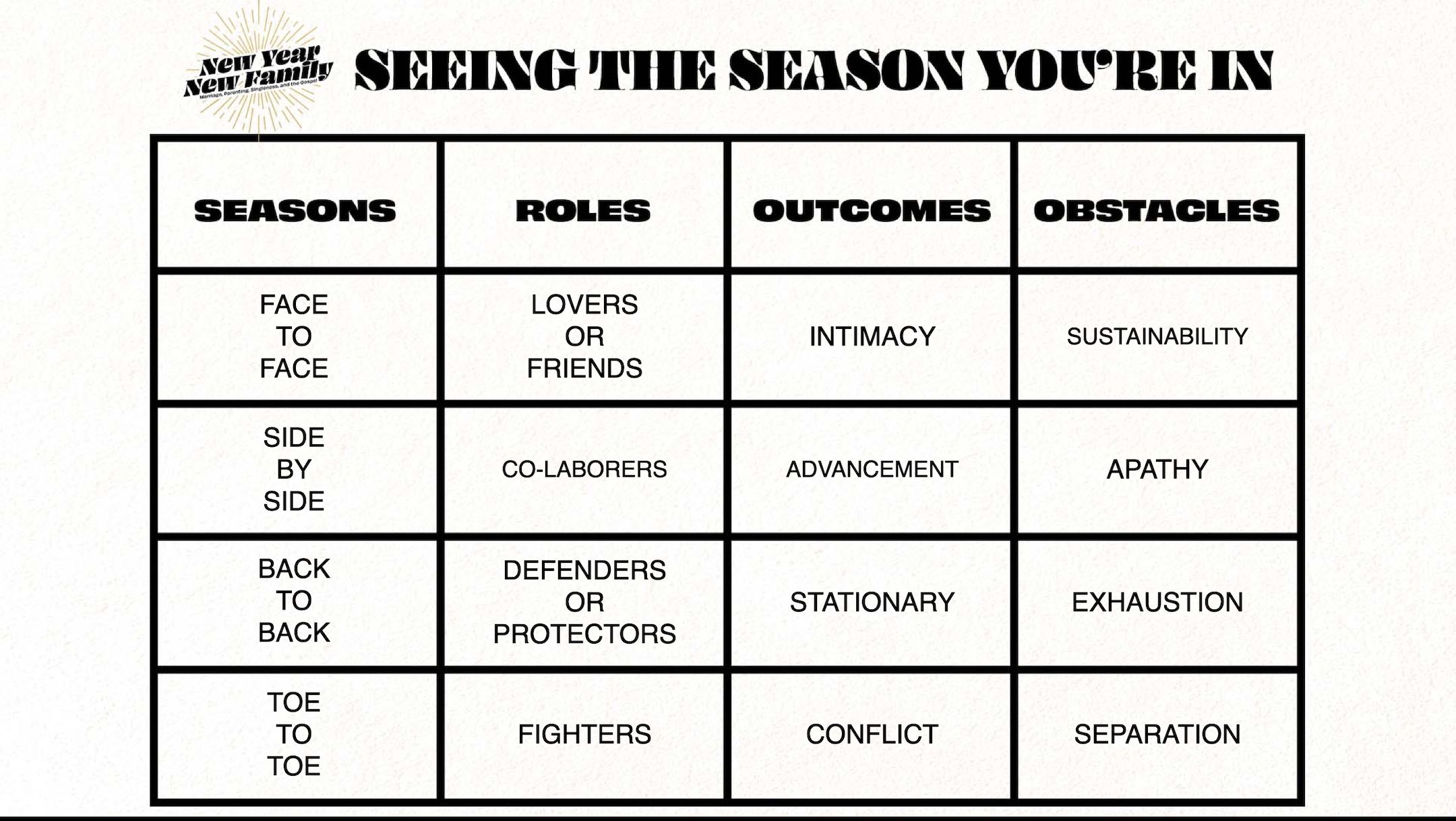