This sermon series dives into common misconceptions of what the bible says! In week one, Pastor Jason Jordan lays down the foundation of what the Bible is. 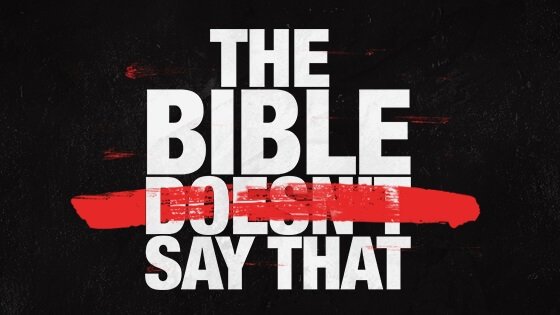 It’s All About Jesus!

INTRO> We begin a new series today that really birth out of a conversation with a church member while we were serving together setting up for Easter. Her and her husband were telling me about a particular conversation that they were having with their friend, who wasn’t a believer, maybe a believer? who knows! But during the course of the conversation I found that there was a particular pattern: Her friend would state an objection as to why they aren’t a believer or aren’t obeying the scriptures then, the young lady that I was talking to would say, “Well, that’s actually not what the Bible says….” then she would go on to explain her belief and why she believed it.

APP> That conversation had me thinking, “how does something like this keep happening? Misunderstandings and misrepresentation happens when you base your beliefs on assumptions. This is largely true of our area when it comes to the Bible. So statements like these make their way into scripture:

APP> And as I thought about the conversation that sparked all of this, I began to see that the common denominator in many of these types of conversations is the scriptures, the bible.

When it comes to the Bible there are 5 types of people:

APP> This is also the progression of discipleship, Which one are you?

CONTEXT> I want to do one simple thing today, from these verses in Hebrews about the bible under the heading 1) What it is 2 show you 3 things:

APP> How can we know this? *Bible Chart

APP> Why is this important? If you reject God’s Word then you reject the God of the Word.

APP> Often times we fail to understand the Bible because we fail to stand under the Bible.

APP> When we open our Bibles God opens his mouth!

“You search the Scriptures because you think that in them you have eternal life; and it is they that bear witness about me,” John 5:39

Big Idea > The point of the Bible is to point us to Jesus.

“It seems to me that our greatest need today is an enlarged vision of Jesus Christ. We need to see him as the One in whom alone the fulness of God dwells and in whom alone we can come to fulness of life. There is only one way to gain clear, true, fresh, lofty views of Christ, and that is through the Bible. THe bible is the prism by which the light of Jesus Christ is broken into its many and beautiful colors. The Bible is the portrait of Jesus Christ. We need to gaze upon him with such intensity of desire that (by the gracious work of the holy spirit) he comes alive to us, meets with us, and fills us with himself,” John Stott, “Understand the Bible” preface page 10

So which one are you?

Big Idea > The point of the Bible is to point us to Jesus.